There are so many different kinds of fairs and festivals around the world it is hard to possibly consider naming which are the best. So, one way of solving the problem is by looking at certain countries that celebrate festivals and fairs the most, and here we have chosen Norway.

For such a relatively small country, Norway has nearly a thousand festivals to choose from, which equates to one for every five thousand Norwegians. These festivals provide the people an opportunity to immerse themselves in cultural and artistic performances. Whether you prefer traditional events, performing arts, or music, here are five of the very best from Norway.

Songlines magazine has voted the Forde Festival as one of the very best in the world for its genre. And it is the largest dance festival in the whole of Scandinavia. This festival was first held in 1990 and if you are into music and dance then it is the very place for you.

It focuses on traditional and world music and dance, and many countries are represented every year at this most famous of festivals.

Perhaps the most famous play ever to be written by Henrik Ibsen has to be Peer Gynt, and it was based on a traditional fairy tale. Set to music by Edvard Grieg it is often performed with the incidental music accompanying it.

Once a year in Vinstra, there is a celebration of this literary masterpiece, which is performed by the enchanting Lake Galavatnet. The lake is situated in the atmospheric Gudbrandsdalen Valley, and since 1967 this highly popular event has been replicating the literary work by Ibsen.

The Sami peoples are sometimes called Lapp’s, but can include anybody that speaks the Sami language that live in Norway, Lapland, Finland, Sweden, and even the Kola Peninsula of Russia. As well as having their own language the Sami culture embraces music, played on traditional instruments. The songs that are most common are called joiks, which are highly spiritual but only contain a few lyrics. Every year since 1991 in Manndalen is a festival to celebrate the Sami culture and its music. The festival is to promote awareness of the Sami way of life and to help preserve its traditions.

The Nordland Music Festival is a collaboration of the best forms of music that Norway has to offer. The festival offers quality music together with the breathtaking scenery of Bodo. The festival embraces nature and everything that is connected with it, with all performances on outdoor stages.

One of the biggest festivals in Norway is held in Oslo and attracts around three hundred thousand visitors each year. The Mela Festival gathers together world-class performers in performing arts, but also there are many musical and dance performances, whilst also focusing on the food culture of Norway. These five very different festivals express the diversity of Norway, its culture and its peoples. Each in its own right is groundbreaking and focuses on their own individual identities. 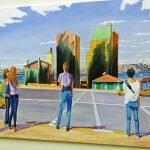